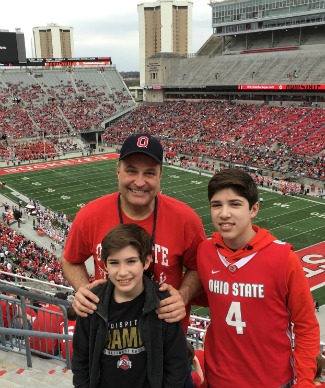 Frank always dreamed of flying. It’s all he ever wanted to do since he was a young child growing up in Ohio. He’s been living out that dream since 1989 while serving in the active duty navy, then serving in the air force reserves pilot for 17 years, and now as a commercial pilot.

At the age of 50, Frank feared he may never fly again when arthritis in his hips caused excruciating pain in his back, hips and knees. The pain also prevented him from enjoying activities with his wife and four children, including an annual trip to an amusement park. Their favorite park is Silver Dollar City in Branson.

“I simply didn’t want to believe I had arthritis and that I’d need to have hip replacement surgery. I kept shrugging it off. I kept thinking, ‘You’re young, things will pass,’” Frank said. “But the pain was unbearable and I was just delaying the inevitable. I finally decided to get on with my life and have surgery. It was life-changing.”

In July of 2017, Frank was referred to Kansas Spine & Specialty Hospital by his air reserves physician, where he had a consultation with orthopedic surgeon, Dr. Damion Walker. Dr. Walker diagnosed Frank with osteoarthritis in his hips and scheduled him for hip replacement surgery on his left hip in August.

The surgery was performed utilizing the Robotic-Arm Assisted Surgery System, which offers patients faster recovery times due to smaller incisions and decreased risk of injury to adjacent healthy tissues.

“I couldn’t believe it, when I woke up after the surgery, the hip pain was absolutely nothing,” Frank said. “I was up and walking with the assistance of a walker that day, a cane in two weeks and back to work within six weeks. And, my back pain was completely gone, too.”

In December 2017, Frank had surgery to replace his right hip. In addition to reduced recovery time, the Robotic-Arm Assisted Surgery technology enabled Dr. Walker to get great precision in the alignment of the hip prosthetic implants, straightening the alignment of Frank’s hips.

“Before the surgery I had always walked a little off, but I don’t walk like a gorilla anymore,” he said. “Dr. Walker literally improved the quality of my life 1000%. A feel a thousand times better than I did!”

Frank is grateful for Dr. Walker and the staff at Kansas Spine. He said the personal attention he received and the ability to have his own private room truly aided in his recovery. He also added that the food was outstanding.

July of 2018, Frank and his family were able to celebrate his birthday by visiting Cedar Park amusement park in Ohio, riding roller coasters and enjoying quality family time together.

“I was able to enjoy the rides without pain,” said Frank. “If I could pass along any words of advice to others suffering from hip arthritis, I’d say don’t wait any longer to get treatment. Live your life now!”

Photos: Frank enjoys an active lifestyle with his wife and four children, including flying, riding motorcycles, going to sports events, and water activities. 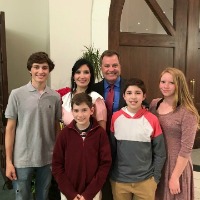 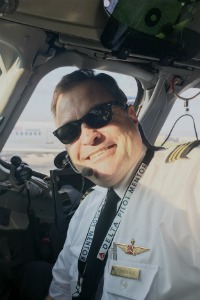