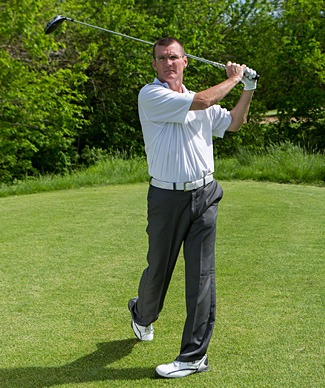 Charles still vividly remembers the day he fell in love with the game of golf. At the age of 11, he attended a PGA tournament with his uncle Charlie. After the tournament, his uncle began teaching him the basics… the grip, swinging… and then they had a chipping contest in the backyard. Charles was hooked!

At the age of 13, he won his first junior championship, and went on continuing to play throughout high school and college. After college, Charles was in the Army for seven years. When he returned, he pursued his dream and started competing in pro golf tours.

“It’s just a part of who I am,” said Charles. “And when you’re out there (on the course) by yourself, you have the sunset, trees, and it’s incredibly peaceful.”

Then in the summer of 2014, while he was competing in a tournament, he began experiencing severe pain in his left shoulder, arm and neck. Two days later he started developing paralysis-like symptoms in his left hand and couldn’t open up his hand any longer. Within a week he’d lost control of several of his fingers. He knew something was seriously wrong.

Charles was referred to Dr. Christian Lothes and, due to the seriousness of his condition, was scheduled for surgery. In August 2014, he had a Medial Facetectomy and Foraminotomy to remove debris in his nerve canal, decompress the spinal nerves and widen his vertebrae.

“From the moment I met him (Dr. Lothes) and when he saw the condition that my hand was in, he went in detail, showing me the spot of where the particle was, and why I was having these problems. He explained things a-z, and what I would be experiencing the day of surgery.”

Charles was released the day after his surgery, and was back on the course hitting golf balls in just three months. Within just seven months, he was back to playing in tournaments. With the help of physical therapy, he is happy to say he has is full range of motion now and back to playing at 100%.

“Everything that happened that day was exactly as Dr. Lothes had explained would happen,” Charles added. “The staff at Kansas Spine & Specialty in general was great. The process in how they took care of me was just awesome.”

“Being back on the course, it was like being back home, being at my sanctuary, and Dr. Lothes gave that back to me.” 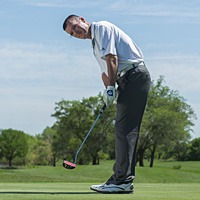